a Back to the top Scroll Down b

Why bigger works out better for K Fresh.

From being laid, to hitting the shelves K Fresh have the whole egg production process down to a tee at their production site in East Yorkshire.

Tom Kirkwood and his Dad, Chris, run the company which has been supplying eggs throughout the UK for over 40 years now. When asked how they describe the company, ‘We like to think we’re a dynamic and forward thinking enterprise, because if you don’t keep moving forward with the times you’ll get left behind” says Tom, and as he continues to talk about the expansion of their business over the last 40 years, it’s clear that they have moved forward at a rate of knots.

For maximum control, flexibility and accountability over the quality and type of rations they feed their layers, K Fresh are proud to have their own mill on site which produces all the feed exclusively for their birds. With feed being the biggest cost of production, it is imperative the right procedures are in place to enable raw materials to be bought and stored in cost effective quantities, ready for production in the mill.

The mills capacity has grown over 300%; Back in 1980 the mills output was around 50 tonnes a week. A successful growth plan has seen mill production increase to around 350-400t a week.

To improve efficiencies the decision was taken to upgrade their mill, location wise it wasn’t straight forward but after careful consideration, Tom had a plan of action.

Rolling out the plans

Firstly, the wheat and barley silos were upgraded to larger capacity 500t models and re-sited to elsewhere on the farm which freed up some space outside the mill. Next it was time to evaluate raw material storage, the priority was to scale up storage capacity for soya – a crucial ingredient in their diets.

The four existing square, industrial steel silos each had a capacity of 30t, one of which was used for soya, but to reap the benefits of buying in bulk, a full load at 28t, often meant they needed to discharge a few tonnes from the silo prior to the soya delivery arriving.  With the mill requiring up to 80t of soya a week this process was not ideal and  Tom was also well aware that also operating on this ‘Just in time’ ordering basis was a risky business, one glitch in the supply chain could have serious implications on the mills productivity.

K Fresh had always found Collinson silos to be the most reliable and hygienic silos to store and discharge their finished rations for the laying and pullet rearing houses, and more recently, on recommendation from their limestone supplier, they had purchased one of their specialist, heavy duty County Range S2 silos which was designed specifically for storing high density material such as limestone.

So, with the Collinson range of silos expanding to include larger capacity, specialist silos for projects just like this, Chris got in touch with National Sales Manager, Pete Eastwood for advice.

Twelve weeks from the initial enquiry, two County Range silos with a wide discharge were delivered to site and fit the bill perfectly in every way.

The cylindrical design of the 55m³ silo measures nearly 11m tall, therefore taking advantage of otherwise redundant space in the air and barely impacting the mill’s already restricted footprint. And to seal the deal the silos were available in a colour coated Plasteel™ finish, Tom and Chris opted for Goosewing Grey to colour match the silos to the mill’s brand new cladding, so despite being such a large silo, they blend into the surroundings impeccably.

When it comes to filling these silos, Tom and Chris, have also been thinking of long term associated costs.  British manufacturer Collinson build all silos to order, designing the specification to meet the site’s exact needs, so instead of opting for the traditional, cheaper option of a filler pipe for pneumatic filling,  the silos have been installed with ladders and catwalks on top for access to special roof hatches to accept a bucket elevator to fill the silos, they have calculated although this equipment may cost more at the outset, in the long term they will reap the benefits of having the soya tipped, rather than pneumatically blown.

Tom told us “The upgrade of the mill has been a massive investment for K Fresh but the mill running efficiently is fundamental to the success of the company overall. It all begins with the raw ingredients and we would always choose Collinson silos for peace of mind that this expensive commodity is in safe hands, or should I say silos’ Tom quipped, he continued on a more serious note, "when we are dealing with raw materials and rations totalling circa 20,000 tonnes a year, we want the best quality that will stand the test of time” 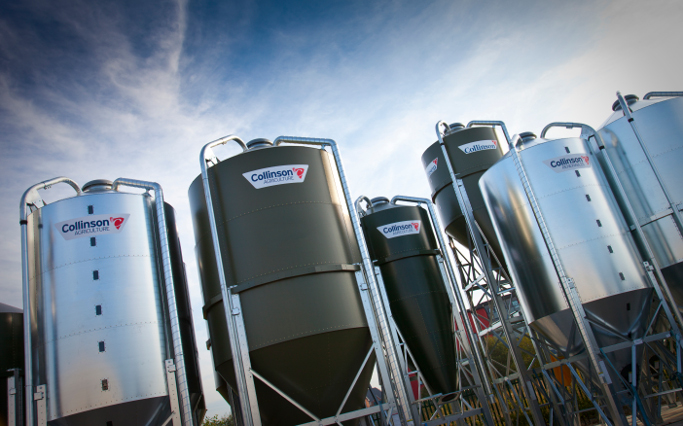