a Back to the top Scroll Down b

Stranraer based Beef and sheep farmer, David Brisbane, has tried a combination of feed delivery and storage methods over the years in an effort to find a cost effective and labour friendly way to store and feed his stock.

From buying feed in bags at a premium price he moved on to blowing feed into tonne tote bags, small savings were made on price per tonne and there was no bag disposal fee, which at £237 per tonne over the year equates to an additional £10 per tonne when rolled into feed costs not to mention the environmental impact of disposal.

However, despite the saving there was still no solution to discharge the feed from the tote bags and so it was down to David’s wife, Marion, to scoop it into the feeder bucket or snacker, thirty labour intensive minutes a day she would never get back.  Until now!

In mid-March with the beginning of the Covid-19 social lockdowns beginning to gain momentum and worldwide news stories showing potential disruption to supply chains, David knew he needed to take immediate action to ensure he could continue to feed his livestock and safeguard his family and visitors to farm.

It was obvious that filling tote bags couldn’t be completed whilst adhering to the working distance guidelines, so it seemed like the right time to bite the bullet and invest in a silo. David phoned a couple of companies to weigh up his options and it was decision time.

Needing to store both sheep rolls and cake he had the option of two Collinson Tristor Minis delivered in semi kit form for final assembly on site, each with a capacity of 4.6t  OR a split silo which could accommodate two different feed types within one structure from another manufacturer.

As expected, the split silo was the cheaper option but David had doubts . . . would it be safe with one side full and one side empty, especially in a windy coastal area like Stranraer? Would it be a false economy? . . .  David discussed the dilemma with Matthew, Regional Sales Manager at Collinson who chatted through the pro’s and con’s and explained why a split silo isn’t in the extensive range of Collinson silos. His mind was made up, it was clear that paying that little extra now would be worth it in the long run. The order was placed and because TriStors are held in stock at their factory in Lancashire the silos were delivered to site just five days later.

Fast forward a week and David had both Tristors built up and feed blown in.

Like the majority of people David had never built a silo before and wasn’t shy to admit he was a little daunted by the task that lay ahead, however the step by step instructions were extremely comprehensive and with his son, Angus, helping the first silo was up and in position in just two and a half hours. Having found his silo building confidence, the second Tristor was built and in position in under two hours. Boom.

“The whole process through from enquiry to self-building has been seamless, fantastic service from the whole team at Collinson. Our storage and feeding regime has been completely transformed in under 10 days, even the assembly, it really was as easy as one, two, three!  Did I make the right decision? Absolutely, the quality of the silos is second to none, you can tell these guys take pride in their work, the silo looks as good from the inside as it does from the outside! Collinson were recommended to me and I wouldn’t hesitate in recommending them to anyone” said David

With the silos now up and running David is seeing how daily feeding time on the farm has been revolutionised.

Usability - the versatile chute lends itself ideally to any job, whether it’s loader buckets, buckets or snackers being filled the easy operation of the chute has turned a labour intensive, time consuming job into an effortless operation, as an added bonus the adjustable chute can also be lowered out of the way to avoid any vehicular damage to the silo.

Monetary – Switching from bag to bulk has made a great difference on feed costs, with a saving of £50 a tonne made by moving bag to bulk, there is some really worthwhile savings to be made in the future.

Find out more about TriStors and how much they cost here 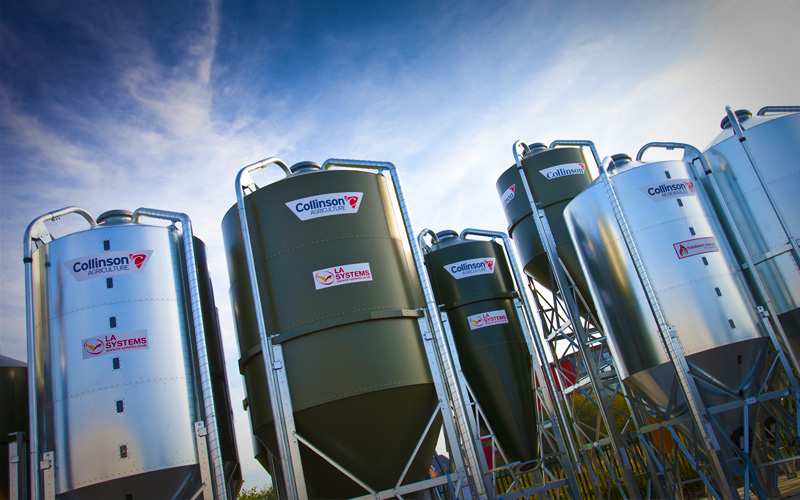